Now that ‘Mama June’ Shannon and Geno Doak have split, she’s got a lot of free time on her hands. And according to a new report by The Sun, the 42-year-old reality star is keeping busy by dating and spoiling 24-year-old TikTok star Jordan McCollum.

Not only is the report claiming Mama June rented Jordan an Alabama home, but it’s also alleging that she bought him two cars, following her breakup with Geno, 45.

Mama June is allegedly “so into” Jordan, who is a single dad to a young daughter and a fellow recovering addict, a source told The Sun. “She really wanted to be public about their relationship, but Jordan has tried to keep things more low-key”.

“You can tell how into him she is. She’s really flirty with him,” the source added.

An insider told The Sun that Mama June bought a 2013 Nissan Altima for Jordan before purchasing a 2019 model when the first one stopped working. Both are said to have cost $40,000 total, and Jordan showed off the 2013 Nissan Altima in a series of Instagram photos on July 17.

“So someone very special to me bought me a car today!” he wrote without naming the gift giver. He then shared a new post on Aug. 2, explaining why he was driving a new car. “Late update but Sally had a bad transmission so everyone meet Spade!” he said.

And in that post, Mama June left a comment with red heart emojis, saying, “You deserve it, and that’s a sexy car.”

The source also alleges that Jordan is living in a two-bedroom home rented by June — she also furnished it for him, according to the report. Thus far, June has reportedly spent $50,000 on Jordan. “She also gives him an allowance every week,” the source claimed.

June and Jordan reportedly bonded over their past addiction struggles and recovery, and she’s already met Jordan’s family and friends. 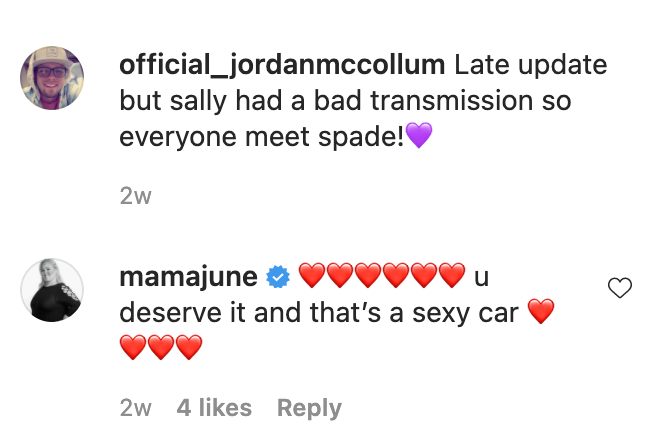 On a recent TikTok post that Jordan shared, in which he opened up about his struggles, June commented and said, “The best video ever cause I agree and will be here at the end of the day.”

As we previously reported on August 16, June recently announced her split with longtime love Geno Doak. “Geno has been out of my life for a while now,” June simply said on Instagram Live.

HollywoodLife reached out to Mama June’s rep for a comment on this report, but we did not receive an immediate response.