Machine Gun Kelly and his daughter Casie Colson Baker wore matching tie dye ‘fits when they were spotted riding a motorcycle together.

Machine Gun Kelly has taken his 11-year-old daughter, Casie Colson for a spin on his Harley Davidson motorcycle. The father-of-one was seen driving the bike in Studio City on June 12, while Casie rode on back. In the snaps, the duo were seen twinning in matching tie-dye ‘fits, with the “Bad Things” singer opting for a bright multi-colored tie-dye tee. Meanwhile, Casie stunned in a pair of pink and white tie-dye sweat pants, which she paired with a white tee and black sandals featuring fluffy pom poms. 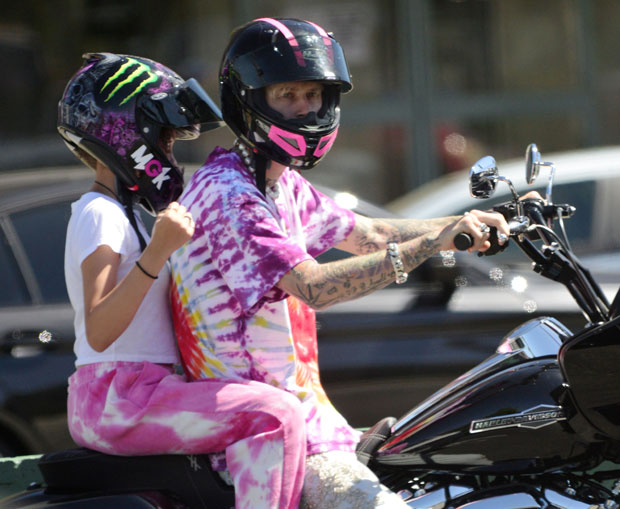 Of course, the father-daughter duo both wore black and pink motorcycle helmets, adorned with MGK’s initials. It came one day before his girlfriend, Megan Fox, 35, visited the happiest place on earth! She shared a photo on her Instagram page on June 13, posing in front of the Sleeping Beauty Castle at the California theme park. The Transformers alum wore a pink sweater with pretty, flower detailing and completed the look with a pair of Minnie Mouse Donut Ears.

Although it wasn’t clear from the pic, fans suggested she visited the park with her kids Noah, 8, Bodhi, 7 and Journey, 4, whom she shares with her ex-husband Brian Austin Green, 47. Meanwhile, MGK shares Casie with his former girlfriend, Emma Colson. When he isn’t spending time with his mini-me daughter, MGK is putting on a loved-up display with Megan, who he’s now been dating for over a year.

“She said ‘I love you’ one year ago today,” MGK (born Colson Baker) tweeted in the late hours on May 25, commemorating the anniversary of when the Transformers alum dropped the L-bomb. One year later, things are going strong, and MGK made sure to celebrate the anniversary of Megan saying those three words.

Their whirlwind relationship began when they met on the set of Randall Emmett‘s crime thriller, Midnight In The Switchgrass. Most recently, Megan opened up on Lala Kent‘s podcast, saying she “knew right away” that he was her “twin flame”. She added, “Instead of a soul mate, a twin flame is actually where a soul has ascended into a high enough level that it can be split into two different bodies at the same time. So we’re actually two halves of the same soul, I think.”