Jennifer Lopez reveals, six months after the wedding, why she married Ben Affleck in Las Vegas 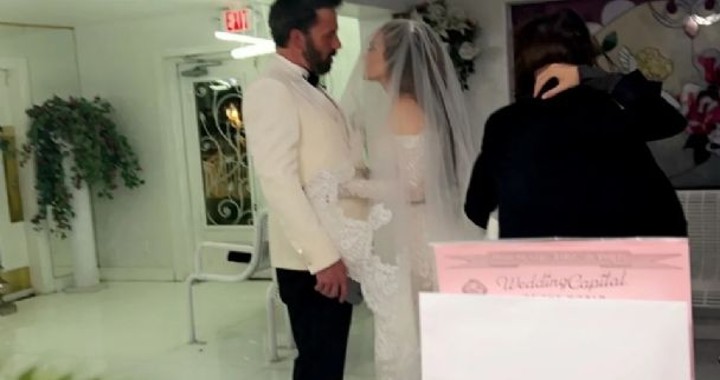 Jennifer Lopez does not miss an opportunity to talk about her relationship with Ben Affleck. In the middle of a press conference to promote her new film, the artist confessed her reasons for surprisingly getting married in Las Vegas on July 16, 2022 . In addition, JLo explained that her husband was responsible for planning the important moment.

In July of last year, months after making public her commitment to the protagonist of Batman vs Superman (2016), the On the Floor interpreter surprised by announcing that she had married in a private ceremony at the Little White Wedding Chapel in Las Vegas, Nevada. ,and that he only had the presence of his children. The following month, the couple held a formal Georgia ceremony attended by hundreds of guests.

The American singer revealed to the press the reasons why she decided to have an intimate marriage to seal her love with the actor.  “She took all the pressure off me about the big family wedding we were going to have. I think that’s why we ran away to Vegas and got married there first ,” the actress admitted.

Lopez, who had an old love history with Affleck, with whom she first dated in 2002 and resumed their relationship two decades later, admitted at the press conference to promote Shotgun Wedding , the new film in which she stars, that her husband was in charge of organize the first wedding.

In the conversation, “Jenny from the block” explained that the formal wedding was planned as a couple , but that her husband owns all the credits for the ceremony in Las Vegas. “She has an amazing eye. She has amazing taste. But everything we do, we try and we do it together. Planning a wedding is a lot of work. It’s very stressful ,” Lopez concluded.