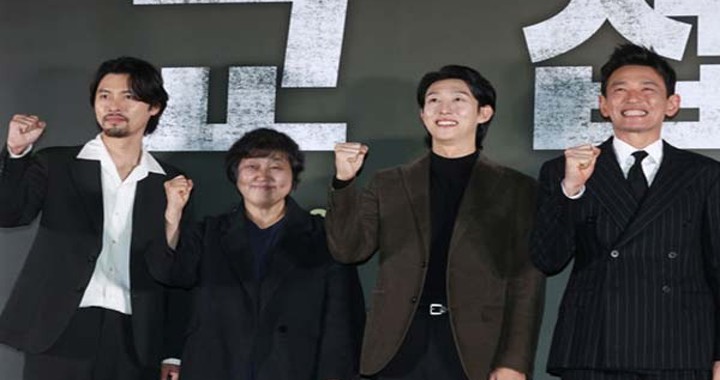 “First of all, I thought I shouldn’t kill too many people. When I shoot a gun or kill people, I wanted to do action for a reason.”

Director Lim Soon-rye meets the audience with his new film ‘Negotiation’ after 5 years. This work depicting a desperate struggle between a diplomat and an NIS agent to save 23 Koreans abducted by the Taliban has a distinctly different outcome from director Lim’s previous films, which put humanism at the forefront. Through this work, director Im challenged himself with a traditional action scene for the first time.

Director Lim, who we met at a cafe in Palpan-dong, Jongno-gu, Seoul on the 16th, laughed and said, “If there is an action field that does not harm lives, I wonder if I can try (action movie) next time.”

“When you watch a movie, there are too many cases where people are killed for no reason. It was a little uncomfortable for the audience. It’s not that things like murder don’t happen in reality, but I think it makes them think about the way they show it. It gives people suspense and catharsis, so it would be nice to be able to create something like that without brutally killing people.”

This film is also the one with the highest budget among director Lim’s productions. The production cost is 16.8 billion won, and the break-even point is 3 million people.

Director Lim said, “I’ve been worrying that I have to pass the break-even point for a long time.” “If this work goes well, I think the range of choices that can make a large-scale movie will widen. In that sense, box office success is important,” he said. laughed

Director Lim said, “There was definitely a point where the material was burdensome,” but “I felt attracted to it because I could think about something big in terms of the subject matter.”

“Even if it’s not necessarily religious, I came to think, ‘Is the belief that I firmly believe in is always absolutely right?’ Also, the state needs to safely return its citizens, and to what extent does the Ministry of Foreign Affairs or NIS staff who carry out that responsibility fulfill such a calling? I think I made it while developing a cinematic imagination about whether to perform ”

Rather than the incident itself, the film focuses on Jae-ho (Hwang Jung-min), a foreign ministry employee who struggles to save the abductees, and Dae-shik (Hyun Bin), a local NIS agent.

Director Lim explained, “I predicted that if the focus is too much on the abductees, the focus of the film will go to other unnecessary discussions. I tried my best to compose the content so that I could focus on the film itself.”

Regarding the first Korean film to be set in Afghanistan, he said, “Since there is not much known about Afghanistan, it was difficult to prepare the material.

‘Negotiation’ is also the reunion of director Lim and Jung-min Hwang after 20 years since ‘Waikiki Brothers’ (2001).

Director Lim said, “I thought it would be very powerful if actor Hwang Jung-min did it in that the character Jae-ho Jeong leads the movie from beginning to end. I am very grateful for the willingness to appear in it, even though it is very different from the roles or genres I have played before.”

“There was a lot of accumulated know-how on how to act to move the audience’s heart. I received a lot of help. The concentration and energy that I worked on in the field was amazing. I thought I’d become a great professional in 20 years.”

Regarding Hyun Bin, director Lim praised him as “an actor with a very good sense of movement and action”, saying, “It is not an exaggeration to say that Hyun Bin did most of the action scenes.”

‘Negotiation’, which is about to be released on the 18th, has been ranked first in real-time reservation rate, beating the Hollywood blockbuster ‘Avatar: Road of Water’ from the afternoon of the previous day. Director Lim said, “I am grateful for the expectations of the audience,” and expressed his expectations, saying, “I hope that we will have a good start (in 2023) as we have waited for nearly two years after completing both ‘Ghost’ and our film.”